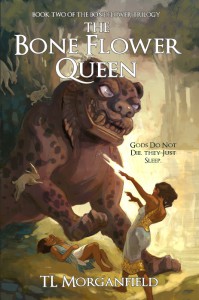 Wow.  Like the first book, there really is not a dull moment in here.  A lot happened, and like in the first book, so much changed from beginning to end.  I felt that there was a great deal more character development in this one, which I had hoped for.  I felt like I got to know Citlallotoc and Topiltzin very well, and I found the the villains incredibly interesting as well.

Occasionally I found Quetzalpetlatl a little bit frustrating.  She distrusted characters I felt were being sincere, and she was often hostile where I would have thought something else would've been appropriate.  This is not a criticism, however.  The main character is somewhat flawed, but she is human, and she is strong, and she learns and changes a great deal over the course of the book.

I admit I hoped to see more between the main character and Quetzalcoatl, because I felt like there were so many unanswered questions, and really, the ending of this book leaves me with more.  I guess I'll just have to be patient with that.  He fascinates me and I really want to see more of him.

The story turned very dark, much more than the first book, in my opinion.  It can be draining, but then the excitement at the end turned that around.  There were a few plot points I guessed at, but the ending itself was a complete surprise to me.  I was blown away and completely lost myself in it, finding myself very dismayed to reach the end, because I still feel attached.

I will enthusiastically recommend these books to my friends.